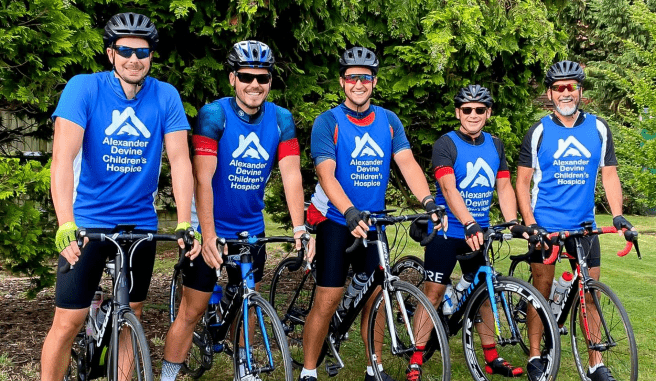 The organiser was James Killian, a business development manager at Pythagoras Communications in Maidenhead, which has supported our children’s hospice service for many years.

As a dad of children aged five and three himself he encouraged four friends to sign up for the nationwide My Prudential RideLondon event and take on the 100 mile cycle challenge to raise money for the charity.

But there was a hitch this year. The usual format for the event – which sees hundreds of cyclists riding together – was abandoned by Prudential because of Covid-19 but instead encouraged people across the UK to participate by riding their own route.

So James and his friends – Daniel Berryman, Stuart Blackman, Steve Wells and Derek Scott – concocted their own route. Starting from Spencer’s Wood near Wokingham they travelled into Oxfordshire and back through Newbury.

“I would describe us all as fairly average and very recreational cyclists. But we were all determined to try and raise as much money as possible for this special charity. None of us had ever ridden anywhere near that distance but we figured the harder we made the challenge, the more people would get behind us and donate.

With most of the team being Dad’s, Alexander Devine is a charity that is close to all our hearts and a tough day in the saddle for us was worth it to try and raise vital funds to help them continue to be there for children and families that desperately need support.

Despite the aching legs, we are all feeling a huge sense of achievement for raising over £3,800 for such a fantastic cause.”

“It is really inspiring to see how people like James, Stuart, Dan, Derek and Steve push themselves out of their comfort zones to try and help others. We are hugely grateful for their impressive efforts and everyone that supported them.

The money they have raised is a huge help for Alexander Devine, especially during these uncertain times when fundraising is incredibly challenging and we have lost vital funds as a result of the cancellation of key fundraising events. What a difference this money will make, indeed it could help us fund over 47 splash sessions in our hydrotherapy pool at the hospice. These sessions are such a wonderful opportunity for families to spend quality time together, making memories that they will treasure.”

Our children’s hospice service covers the whole of Berkshire and into surrounding counties. If you think your child may be eligible for our services, please do get in touch.

Are you a nurse or carer interested in working in children's palliative care?

Come along to our Careers Morning on Saturday 1st October at our hospice in Maidenhead to find out about the varied, exciting, and rewarding roles we have available.

This event is aimed at Band 4 Nurse Associates, Band 5 and 6 Nurses, Band 3 and 4 Carers, and Nursery Nurses.

To book your place email ameliap@alexanderdevine.org

When this happens, it's usually because the owner only shared it with a small group of people or changed who can see it, or it's been deleted.
View on Facebook
·Share

Last week we had the pleasure of welcoming the Mayor of the Royal Borough of Windsor & Maidenhead, Cllr Christine Bateson, to our children’s hospice in Maidenhead.

It was a wonderful opportunity to show her our amazing state-of-the-art facilities and talk about the vital support we give to local children and their families, all made possible by donations and fundraising.

There are many misconceptions about what children’s hospice care is all about. Not many people understand the all-encompassing care that children’s hospice services like ours provide to children with life-limiting and life-threatening conditions, and their families. As well as the specialist clinical care, our holistic and bespoke approach aims to provide the best possible support for each child and family. This includes support such as much-needed respite, specialist play for children and their siblings, symptom management, family support services, end of life care and bereavement support. As well as at our children’s hospice in Maidenhead, Alexander’s Care Team provides support in the family home and the community, including hospitals and schools.

With facilities at our hospice such as a hydrotherapy pool, sensory room and accessible playground, we offer opportunities for children and their siblings to experience fun, joy and adventures, and help families make precious memories for as long as they have. For some of these children and their families, we will support them for many years, for others it may be a shorter period of time.

During the visit, our CEO Fiona introduced the mayor to our some of our wonderful volunteers and members of Alexander’s Care Team. However, we think it was Thomas and Keanu’s big smiles that definitely proved to be the highlight of the visit!

We were very grateful to receive a donation of amazing mental health awareness self-care packages from Charlotte, founder of a lovely local small business called MindFill. They work with a range of clients to curate beautiful and bespoke branded care packages to help with employee wellness.

Thank you for thinking of us, what a lovely treat! ... See MoreSee Less