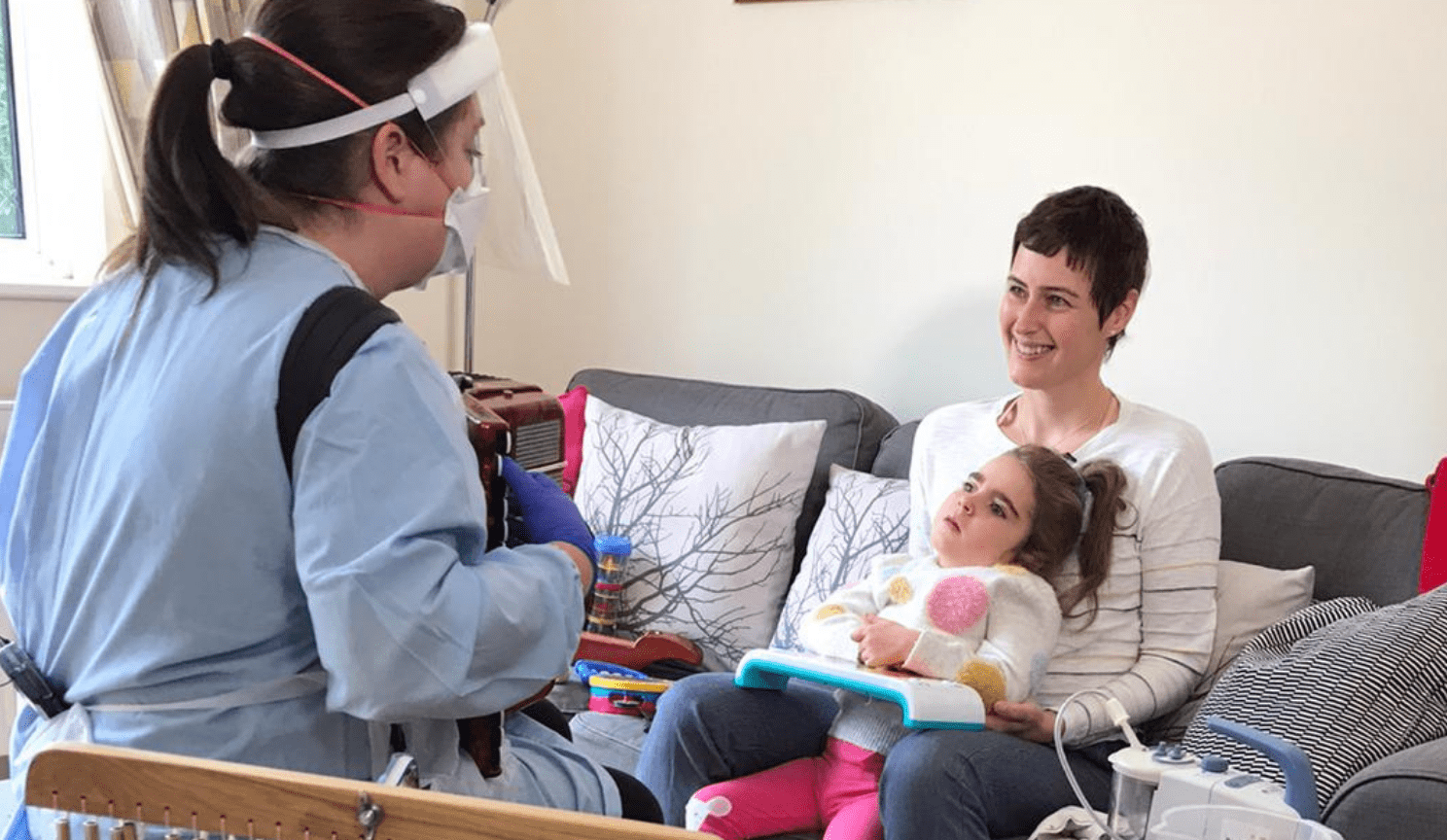 On Sunday 25 October, a young girl supported by Alexander Devine Children’s Hospice Service is one of several special children featuring in a BBC Lifeline Appeal for the national charity Jessie’s Fund, which has supported music therapy at Alexander Devine for the past three years.

Six year old Jessica has Leigh’s syndrome, a life-limiting neurological disorder that affects her mental and movement abilities. Her parents Vicky and Keith were told that she might not live past her toddler years, so have devoted themselves to providing her with the highest quality of life. Jessica is supported by Alexander Devine Children’s Hospice Service and through which she has been receiving music therapy for the past nine months.

The music therapy sessions have taught Vicky how to communicate with her daughter Jessica, and hear what she needs. The sessions are the highlight of Jessica’s life, bringing joy to the whole family, especially during lockdown. Vicky told us:

“Jessica loves music and having music therapy gives her an opportunity to express herself. Alexander Devine’s music therapist, Anouska, provides her with choices of what instruments to play and she is able to get involved in turn taking and directing the tempo and rhythm of the music.

For this to have been offered during lockdown has been a slice of normality that has been lacking in so many parts of Jessica’s life. Having music therapy to look forward to each week has meant the world to Jessica as she musters as much energy as she can to put into her sessions.”

“For children like Jessica, music therapy gives an opportunity to be creative and be heard when verbal language is not always possible. It is a space where she can take her time to communicate, choose instruments and vocalise how she is feeling. The child is always at the heart of every session and they are in control of how the session runs. It is also so wonderful to be able to share these sessions with other family members.

Alexander Devine is a charity that relies nearly entirely on fundraising and donations to run its lifeline services. So we are appreciative of the funding support from Jessie’s Fund over the last three years. It has enabled us to run music sessions for children like Jessica, making such a difference to her life and helping her family create such precious memories.”

The ten minute programme on BBC TV will provide a unique opportunity to catch a glimpse of how powerful music can be for children who have complex needs. Whether an individual child is in music therapy, or a class in a special school is interacting in a specialist music session, music can open pathways to communication and learning.

“Communication is one of the most basic needs of all humans: the children we work with struggle to communicate, and some have no means to express themselves at all.  Music is a powerful way in which they can connect with the world around them: on 25th October there’s a chance to witness moments of this on BBC TV.”

BBC Lifeline Appeal which will be aired at 14:05 on Sunday 25th October on BBC One, and again at 14:30 on Tuesday 27th October on BBC Two. The programme will also be available on iPlayer after the broadcast.

Our children’s hospice service covers the whole of Berkshire and into surrounding counties. Anyone can make a referral to Alexander Devine Children’s Hospice Service and if you think your child may be eligible for our services, please do get in touch.

Shades on and chilling in our hydrotherapy pool - how super cool is Pippa?! 😎

Our gardening club volunteers took delivery of a very special gift this month - a fantastic John Deere sit on mower, which was very generously donated to us by Farol Ltd.

Matt Vellacott, Managing Director at Farol, told us "we are very pleased and proud to help such a worthy cause.”

The new mower was delivered by Farol Twyford's Manager, Barry Sharp. He kindly spent the morning with our volunteers giving them a tutorial on looking after it and showing them how to use it.

Children and families love using the outside space at our beautiful hospice and the new mower will make it so much easier to maintain our grounds for them to enjoy.

Thank you Matt, Barry and all at Farol for your wonderful and generous donation, it really will make a world of difference. ... See MoreSee Less

Well done to these Spartan heroes! 💪

We are so proud of the team from OpenText office in Reading who took on the mighty Spartan Obstacle Race in Henley earlier this month.

For those unfamiliar with Spartan races, they are obstacle courses that test speed, strength and endurance. The OpenText team had to conquer 20 off-road obstacles, including climbing walls, crawling under wire, traversing monkey bars, spear throws and of course lots of mud!

An amazing challenge and they managed to raise over £725! 👏 ... See MoreSee Less